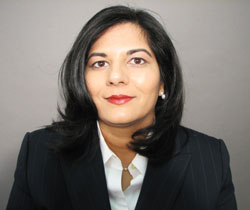 Born to immigrant parents as a first generation Indian American, Attorney Ahsan witnessed the firsthand effects of our immigration policies. She personally felt the consequences of the ongoing changes in the laws.

Born to educated professionals forced to find opportunities in the United States not available in their home country, Attorney Ahsan was taught to appreciate her American citizenship at an early age. Years later, she would again experience the frustration of the immigration process as she worked through a J-1 visa waiver with her husband.

This upbringing and current life experience not only provides Attorney Ahsan with a unique understanding of the life changing issues facing immigrants, it drives her to simplify the immigration maze and open opportunities for foreign professionals.

Attorney Ahsan practices general immigration law with an emphasis on professionals in the medical, education and technology fields, as well as family immigration and naturalization and citizenship issues. Prior to establishing the Madison Immigration Law Group, Attorney Ahsan represented many different minority groups on a variety of legal disputes in administrative hearings, state and federal courts.

Attorney Ahsan is licensed to practice law and is a member of the State bar associations located in Florida, North Dakota, and Wisconsin. Attorney Ahsan is also licensed to practice in the U.S. Federal Courts located in North Dakota and Wisconsin. She is a member of the American Immigration Lawyers Association and the American Bar Association. She has provided written commentary of immigration issues and understands Urdu/Hindi. She obtained both her law degree and her masters of business administration degree from Stetson College of Law in St. Petersburg, FL in 1999.

Get To Know Us

In the Information Technology industry – time is money. I can’t afford to wait. Attorney Ahsan moves at our rapid pace and is often one step ahead. Her personalized attention gives us peace of mind that me and my family rely on to know that we are legally protected.